Dave Stewart is recognised as both an accomplished musician and one of the most respected multi-media entrepreneurs in the music industry. He is well-renowned throughout the industry as an author, filmmaker, photographer, producer, director and philanthropist.

"A fearless innovator and a visionary of high order" Bob Dylan 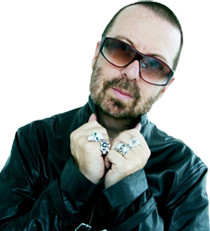 His career spans the last 25 years, having achieved over 75 million album sales with Eurythmics' partner Annie Lennox. In 1999, the duo were honoured with a Lifetime Achievement Award at the Brits. He has won Best British Producer award four times, Best British Songwriter award 5 times as well as numerous Grammy Awards and MTV European Awards. He has won The Silver Clef Award for Lifetime Achievement and a special award for contribution to British Music awarded by the British Music Industry. If this isn't enough, he is also a highly-regarded artist and filmmaker. He has been active for several years in cinema, scoring for numerous films and his work as a professional stills photographer has been well documented. In 2003, he was approached by Nelson Mandela to help fight against the Aids epidemic.

A world renowned figure Dave draws on his extensive experience to offer audiences insights into the secrets of his sustainable success. He is known as one of the most prestigious British record producers, working with the biggest names in the music industry worldwide. Having worked on numerous major ad campaigns and magazine covers and lectured on creativity for the UK Government and the advertising industry, he has the affable ability to innately recognise the genius in other people and put it into play without being manipulative.

Inspiring and professional, Dave is the ultimate expression of effortless spontaneity in the field of infinite possibilities.

How to book Dave Stewart?