Daniel Sieberg is Co-Founder and Chief Content Officer at GoodTrust, a digital-legacy and end-of-life platform that uses AI, customizable UX and pragmatic and emotional pathways to preserve anyone's afterlife. Daniel is the author of The Digital Diet: and co-author of Digital Legacy: Take Control of Your Online Afterlife.

"Our past, present and future will always be intertwined with technology" 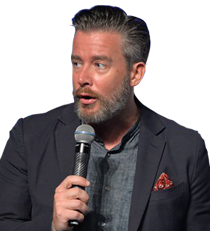 Daniel previously spent several years as a senior executive at Google and Huawei and 12 years in news across ABC News, CBS News and CNN as an Emmy-nominated science and technology correspondent. During his time at Google, Daniel launched countless large-scale projects and is a graduate of the prestigious LEAD program. Sieberg has been nominated for five national News & Documentary Emmy Awards and he has appeared as a featured guest across the Discovery Channel, MSNBC, BBC News, NBC's Today Show; he also hosted dozens of episodes of CNN's sci-tech show [email protected] and 40 episodes of "G Word" for Planet Green. He is on the Board of Trustees at Saybrook University and has advised multiple start-ups and Fortune 100 companies.

Daniel has seen it all and developed a presentation style unique to himself: the role of tech philosopher. How do we make sense of any new technologies and ensure they are now only right for the times but right for us? What are the practical implications of future innovation and invention - beyond the gimmicks and gee whiz? Daniel cuts through the noise and unpacks all the developments from recent history but also looks ahead to what's next. His goal is to generate critical thinking and awareness when it comes to where we're headed in the 21st century. How should we apply anything new - and why?

Daniel is your guide through the complexities of technology and speaks to advancements in language that both experts and amateurs alike can relate to.

How to book Daniel Sieberg?