Prolific Author & the Most Widely Cited Sociologist in the World Today

Lord Anthony Giddens popularised the notion of the "Third Way" in political thinking, and his advice has been sought by political leaders from Asia, Latin America and Australia, as well as from the US and Europe. Frequently referred to as Tony Blair's guru, he has made a strong impact on the evolution of New Labour. He currently serves as Emeritus Professor at the London School of Economics. 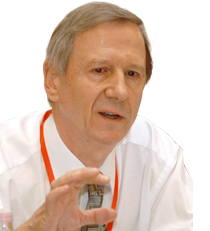 Anthony Giddens served as Director of the London School of Economics and Political Science (LSE) from 1997 to 2003. He was previously a Fellow and Professor of Sociology at King's College, Cambridge. He was the 1999 BBC Reith Lecturer. His first work, 'Capitalism and Modern Social Theory', has been continuously in print for more than three decades. He was given a life peerage in 2004, as Baron Giddens of Southgate. In 2002 he was awarded the Prince of Asturias Prize for the social sciences, known as 'the Spanish Nobel Prize'.

Anthony Giddens is the most widely-read and cited social theorist of his generation. His ideas have profoundly influenced the writing and teaching of sociology and social theory around the world. In particular, he developed the theory of "Structuration", which is the understanding of the relationship between individuals and the conditions around them.

Anthony Giddens is renowned for his clear and fluent speaking style and continues to be in great demand by corporate clients the world over.

How to book Lord Giddens?