Adam Gilchrist AM is a renowned name in World cricket being part of Australia's successful 1999, 2003 and 2007 Cricket World Cup campaigns. During his career, he played for Australia in 96 Test matches and over 270 One-day internationals. He was Australia's vice-captain in both forms of the game. He retired from international cricket in 2008 & was "paid tribute" by Mike Munro from Channel 9's "this is your life" in 2009. In 2008, he joined the Nine Network appearing as one of a panel of revolving co-hosts for the revived Wide World of Sports Weekend Edition. He made his debut on the program in 2008 and commentates on Nine's cricket coverage during the Australian summer.

"Adam is renowned for walking when he considers himself to be out, sometimes contrary to the decision of the umpire" 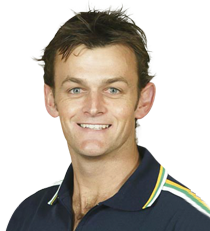 Adam Gilchrist made his first-class debut in 1992, his first One-Day International appearance in 1996 in India and his Test debut in 1999. He is an ambassador for the charity World Vision in India, a country in which he is popular due to his cricketing achievements. Adam reached the 100 and 200 dismissal milestones faster than any other wicket keeper in test history and he is one of only two players to have averaged greater than 60 going through 3000 test runs. In 2010, he was made a Member of the Order of Australia for his services to cricket and the community.

Adam Gilchrist is one of the finest Australian cricketers, having played a significant part in redefining the role of an opening batsman in One Day Internationals. He is acknowledged for his leadership and outstanding contribution to the Australian team in both forms of the game. Many critics believe that Adam is the greatest wicketkeeper / batsman to have played the game. He is an entertaining and motivating speaker who regularly addresses both corporate and sporting functions. His presentations include a humorous behind-the-scenes insight into the world of professional cricket.

Adam Gilchrist's reputation for integrity and natural charisma comes together with his reputation as one of the most exhilarating cricketers of any age. With a number of sporting anecdotes related with wit and affection, Adam's presentations are very amusing and give an insight to life behind the stumps. Adam's warm and down to earth style is always a winner and appeals to a diverse array of audiences.

How to book Adam Gilchrist AM?