Will Carling was England's youngest, longest-serving and most successful skipper ever taking on the position at the age of 22. He captained England for 59 Tests, winning 44 of them. His leadership qualities ensured England dominated the Five Nations in the first-half of the 1990s completing Grand Slams plus a further Championship in 1996.

One of the UK's premier motivational speakers 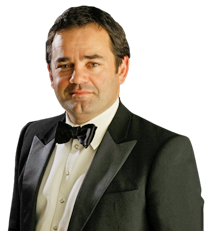 His business career has been as impressive as his playing successes. From Sedbergh School and Durham University he was commissioned as Lieutenant in the Royal Regiment of Wales before moving onto a marketing post with Mobil Oil in 1988. He now runs his own corporate hospitality company, Will Carling Management, and "The Pack" - the ultimate corporate cycling club. '

As one of England's most successful ever rugby captains Will knows exactly what it takes to get the best out of a team. He explains the importance of strong leadership and shows companies and organisations how to succeed through training, teamwork and motivation.

An entertaining and practised speaker, Will's presentations are packed with great ideas aimed at motivating and achieving peak performance.

How to book Will Carling OBE?