Warren Gatland is the 2013 & 2017 British & Irish Lions coach and is one of the most well respected coaches in world rugby having led Wales to Grand Slams and Wasps to domestic success. He achieved great success as a player in New Zealand before making his name as a coach in the northern hemisphere. 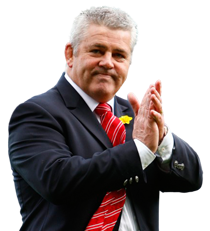 Warren launched his coaching career as player/coach for Taupiri in 1989. In 1996, he became coach to Connacht leading them to the quarter-finals of the European Challenge Cup in 1998. In 1998, he was appointed Ireland coach holding the post until 2001. He then joined the coaching staff at Wasps who he helped steer clear of relegation. In Europe, he won the Challenge Cup in 2003 and the Heineken Cup at Twickenham in 2004. In 2004/2005 season he returned to New Zealand, where he was coach to the Waikato Air New Zealand Cup team. In 2009 he was forwards coach to the British & Irish Lions as they slipped to a thrilling 2-1 series defeat to South Africa. Warren has been head coach of Wales since 2007.

Warren Gatland draws from his experiences as a professional rugby player and coach, inspiring and motivating audiences to achieve their goals. The importance of good teamwork and leadership both on and off the field is clear from his presentations and he assists people to incorporate these skills into their personal lives as well.

Warren is an entertaining and practised speaker whose presentations are packed with great, forthright ideas aimed at motivating and achieving peak performance.

How to book Warren Gatland?