Virginia Wade OBE was the Number 1 British player for over a decade, but the crowning moment of her career was when she won the Wimbledon Singles Title in 1977. Queen Elizabeth II presented the Trophy, in what was her Silver Jubilee year. Besides Wimbledon, she also won the 1968 U.S Open Singles Championship and the 1972 Australian Open Singles Titles, as well as four Doubles Titles at the Australian, French and U.S open. 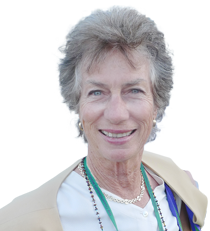 Virginia was ranked in the world top ten for 13 consecutive years. She won 55 singles titles and 839 matches- the fourth highest in the history of women's professional tennis. In 1989 she was inducted into the International Tennis Hall of Fame in Newport, Rhode Island. A graduate of Sussex University with a Bachelor of Science degree, Virginia became the first woman elected to the Wimbledon Committee. She also played Legends Events for a number of years. Virginia currently provides the TV commentary for the BBC and various networks in the USA.

Drawing on her experiences as Wimbledon Champion and respected TV commentator Virginia has become one of the most respected speakers on women's tennis. She has commented on high ranking events throughout the world with the BBC and offers a unique perspective on the sport.

Virginia entertains and engages audiences with her presentations, which are a great mix of humour, anecdotes from her career and inspirational messages from a former Wimbledon Champion.

How to book Virginia Wade OBE?