Vince Gilligan is an American writer, producer, and director. He is known for his television work, specifically being the creator, head writer and executive producer of Breaking Bad and its spin-off Better Call Saul. After writing and directing the Breaking Bad pilot, Vince received the 2008 Writers Guild Award for Episodic Drama and accepted a Peabody Award honoring the show's first season. In 2012, the Writers Guild honored the show once more with both Episodic Drama and Drama Series Awards, and in 2013 awarded the show with the Drama Series Award once again. Breaking Bad earned Emmy Award nominations in 2008, 2010 and 2012 for Outstanding Directing for a Drama Series and was named one of the Top 10 Programs of the Year in 2008, 2010, 2011 and 2012 by the American Film Institute.

"Breaking Bad, one of the most critically acclaimed show on TV" 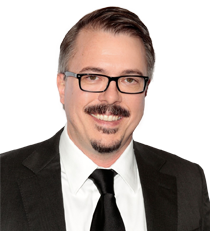 Vince Gilligan was born in Richmond, VA, and raised in Farmville and Chesterfield County. He received the Virginia Governor's Screenwriting Award in 1989 for his screenplay Home Fries, which was later turned into a film starring Drew Barrymore and Luke Wilson. As a writer and executive producer on The X-Files, Gilligan shared Golden Globe Awards in 1995, 1997 and 1998 for Best Dramatic Series. His other credits include the Fox Television series The Lone Gunmen, which he co-created, and the features Hancock, starring Will Smith and Charlize Theron, and Wilder Napalm, starring Debra Winger and Dennis Quaid.

Vince Gilligan shares his insights with audiences across the world about one of TV's most popular shows, its characters' fates and his own journey to becoming one of the most celebrated writers in television history. Vince shares many pearls of wisdom about his own career.

Thought provoking and inspiring and with a captivating and humorous style, Vince Gilligan's presentations are well received at prestigious conferences around the globe.

How to book Vince Gilligan?