There have been few vocalists in the history of heavy metal whose singing style has been as influential and instantly recognisable as Rob Halford. Considered one of the most powerful singers in rock, Rob is best known as the lead vocalist for the Grammy Award-winning heavy metal band Judas Priest. 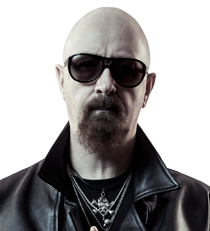 Rob began singing as a teenager and worked first as a theatrical lighting engineer. In 1973 he joined Judas Priest, and with him on board, their first album was released in 1974. The following years, the band built a worldwide loyal cult and Rob had become one of the best singers in all of hard rock, able to effortlessly alternate between a throaty growl and a falsetto. The band had countless international gold- and platinum-selling hits making Priest one of the most influential heavy metal bands of the '70s and the one that spearheaded the New Wave of British Heavy Metal late in the decade.

In his presentations, Rob shares his compelling and funny stories and experiences and shows how his "Rock Star" life lessons can be perfectly translated to inspire people and to bring them forward in their career.

Rob's presentations and appearances are filled with ideas and inspiration that will energise any audience at events around the globe.

How to book Rob Halford?