Victor Ubogu is a successful international rugby player and businessman. He is a former member of the England squad and played for Bath professionally. One of the game's great characters, He was an extremely dynamic and mobile forward, the sight of Victor Ubogu in full charge with ball in hand must have been a daunting proposition for many an opposing defence. 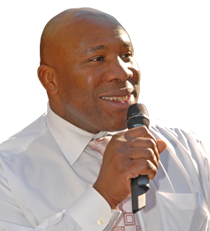 Victor played his club rugby for Moseley, Richmond and Bath, and he made his debut for England in a win against Canada in 1992. He was soon in action against the newly returned South Africans, a match which finished 33-16 to England. He was not needed in the 1993 Five Nations, but he chalked up another impressive scalp against New Zealand in the autumn. Victor probably played his best rugby in the 1995 Grand Slam campaign, scoring a piledriver of a try against Wales and striking fear into the hearts of the French with his violently effective running. He enjoyed a reasonable World Cup in South Africa where England finished fourth.

Victor draws from his experiences as a professional rugby player to motivate and inspire audiences. He explains the importance of good teamwork and strong leadership both on and off the field.

An entertaining speaker, Victor is a great motivator and an excellent after dinner speaker, his presentations are always well-received.

How to book Victor Ubogu?