Musician & Lead Guitarist of the Scorpions

Uli Jon Roth is a multi-faceted phenomenon whose unique set of artistic talents has gained him an international reputation as a musical visionary and innovator. He became famous as Scorpions lead guitarist, and is one of the earliest contributors to the neo-classical metal genre.

"One Of The Most Influential Musicians And Artists Of Our Time" 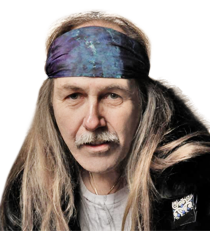 Uli is a true multi-instrumentalist who writes his own musical scores and arrangements. He is the inventor of the unique instrument - the by now legendary 6-octave Sky guitar which is without peer and continues to be so. In 2006, Uli founded a teaching facility in Los Angeles and named it Sky Academy with the purpose of sharing his musical philosophy. Since then he has held over sixty Sky Academy seminars in many different countries. With their wide-reaching range of teachings, these seminars have proved very popular not only with musicians, but also non-musicians and fans. Uli loves teaching and is currently preparing his first Sky Academy book, which is devoted to the metaphysics of music. Widely recognised, Uli is seen by many as a trend-setter who has often been considerably ahead of his time.

Uli Jon talks candidly about his career. He is an instantly recognisable and highly popular figure who offers audiences an insight into the secrets of his success and life as one of the most influential musicians of our time.

A charismatic personality, Uli Jon Roth speaks enthusiastically and openly in his inspiring presentations. He is also a fantastic storyteller, leaving audiences well and truly inspired and entertained.

How to book Uli Jon Roth?