Tom Bower is an investigative historian and journalist. A 27-year BBC veteran, he has gained worldwide renown as an expert on politics, finance, and the international intelligence community. He is an award-winning producer of over 200 television documentaries. In addition to Nazi Gold, his critically-acclaimed works include The Paperclip Conspiracy, The Red Web, The Perfect English Spy, Maxwell the Outsider and The Final Verdict. He is a former reporter for the BBC's Panorama and a noted author of highly critical unauthorised biographies. 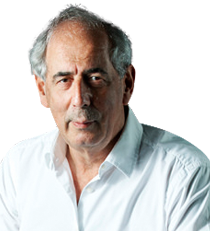 In 2003 Tom won the William Hill Sports Book of the Year Award for 'Broken Dreams', an investigation into corruption in English football. He has a distinguished reputation as an investigative historian, broadcaster and is the author of several ground-breaking books about tycoons. Among his other much-debated biographies are those of Mohammed Fayed, Richard Branson and Robert Maxwell.

Tom Bower's lectures are an important and moving program for any organisation wishing to experience and understand the many political and ethical questions behind the headlines.

Tom is renowned for his clear and fluent speaking style and continues to be in great demand by corporate clients the world over.

How to book Tom Bower?