Tom Avery is a pioneering polar explorer, climber and ski mountaineer. He is best known for his record-breaking polar expeditions which have taken him to the furthest corners of the planet. Tom is part of an elite group of less than ten people in history to have completed the polar trilogy; the South and North Poles and a crossing of Greenland.

"Tom is one of the UK's foremost explorers" 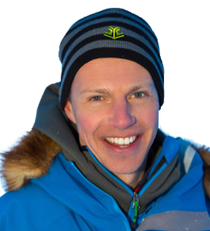 Tom has organised over a dozen expeditions across the globe and is the youngest Briton to have been to both Poles. His 2005 Ultimate North team made headlines around the world for recreating Robert Peary and Matthew Henson's disputed discovery of the North Pole in 1909, and in the process entering the Guinness Book of Records for "The Fastest Surface Journey to the North Pole". His most recent challenge saw him breaking another World Record, this time for the fastest coast-to-coast crossing of Greenland in 2015. Tom is a graduate of Bristol University, where he gained a degree in Geography and Geology. He is a Fellow of the Royal Geographical Society and Explorers Club of New York.

Drawing on his own experiences in the worlds of both exploration and business, Tom explains how communication, planning, goal setting, creative thinking, patience, organisational skills, flexibility to meet and overcome unexpected obstacles, risk analysis and individual determination are vital ingredients in achieving results when under extreme pressure.

Tom is an incredibly passionate, inspiring and entertaining speaker who illustrates his presentations with a stunning collection of images and video clips.

How to book Tom Avery?