Vice-President of the IOC

Dr. Thomas Bach is the Vice-President of the IOC and a member of its Executive Board. He has worked with the IOC in various executive roles since 1996. A former Olympic athlete in fencing, he is the Chairman of the engineering company Michael Weining AG, Germany and President of the Ghorfa Arab-German Chamber of Commerce and Industry e. V amongst other positions. 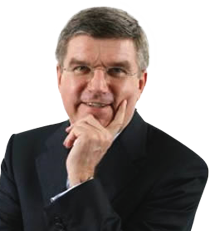 Dr. Bach has a Law and Politics degree from the University of Würzburg. He was a member of the Supervisory Board of the FIFA 2006 World Cup Organising Committee, Chairman of the Board of Trustees of the FIFA Women's World Cup Germany 2011 Organising Committee and Founding President of the German Olympic Sports Confederation. In 1976 he became Olympic Champion in Fencing in Montreal, World Champion in 1976 and 1977 and was the winner of the 1978 European Cup of Champions as well as winning numerous national championship titles.

A former Olympic and world champion, as well as an experienced businessman, Thomas Bach offers audiences a unique perspective and inspirational insights into the word of sports and particularly the Olympics.

He presents in English, German and French.

How to book Dr. Thomas Bach?