Sven Fischer has been considered one of the best biathletes of all time. The former German biathlete collected an impressive tally of medals throughout his career at the Olympics, World Cup and the World Championships. Today Sven is a sports advisor and comments for German television station ZDF.

One of the best biathletes of all time 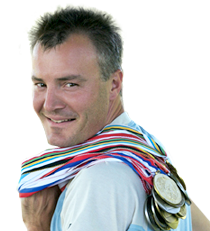 Sven Fischer won the World Cup on two occasions, came second twice and third three times. In the World Championships, Sven amassed seven gold medals, six silver and seven bronze, four of his gold medals being in the relay, one from the individual and one from the mass start. He was also a successful Olympian winning four gold medals (plus 2 silver and 2 bronze). In his outstanding sports career he won 33 World Cups and was 150 times on the podium at the most prestigious competitions in the world. Sven retired after the 2006/07 biathlon season.

His character and determination was illustrated from the beginning of his career, when he overcame problems with both his kneecaps after a growth spurt as a youth. Sven offers audiences insights into how to achieve great success at the highest level, overcoming all obstacles and easily translates his vast experiences to business contexts.

Sven Fischer's vivid presentations engage the audiences and show them how they can take action to achieve the unthinkable.

How to book Sven Fischer?