A Silicon Valley icon and philanthropist for more than thirty years, Steve Wozniak has helped shape the computing industry with his design of Apple's first line of products the Apple I and II and influenced the popular Macintosh. In 2009 Steve Wozniak joined Fusion-io, a data storage and server company as their chief scientist.

"Never trust a computer you can't throw out a window" 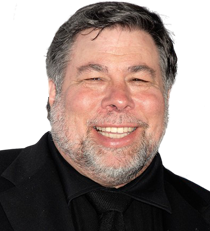 In 1976, Steve Wozniak founded together with Steve Jobs Apple Computer Inc. After leaving Apple in 1987, Wozniak was involved in various business and philanthropic ventures, focusing primarily on computer capabilities in schools and stressing hands-on learning and encouraging creativity for students. In 2001, he co-founded Wheels of Zeus to create wireless GPS technology and in 2006 he co-founded Acquicor Technology, a shell company for acquiring technology companies and developing them.

One of the most influential pioneers of the technology industry, Steve Wozniak takes a highly customized approach to each presentation he delivers, ensuring a topical focus for each client that is unique, conversational and an excellent tie-in with the overall event. With inventions and machines that are credited with contributing greatly to the personal computer revolution started in the 1970s, Steve delivers high content talks from his unique perspective of the modern technological panorama.

Having never written an entire speech out in advance, Steve Wozniak's highly personalised, unforgettable presentations are memorable insights into his unique viewpoint of the computer industry.

How to book Steve Wozniak?