Sergey Bubka is best known as the world record holder in the pole vault. He held the title of World Champion for 16 years (1983 to 1999) as he won 6 consecutive gold medals. He is still the only athlete in any event to win at six world championships. After his sports career Sergey became a sport administrator, politician and businessman and is currently the President of the Ukrainian National Olympic Committee, Senior Vice President of the IAAF, Member of IOC Executive Board and Chairman of the IOC Athlete's Commission.

"Sergey is widely regarded as a living legend of sport" 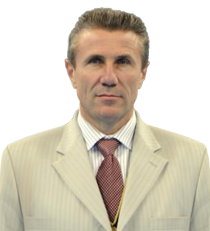 In 1985 Sergey became the first vaulter in history to clear the "unattainable" 6 metres barrier, capturing the imagination of sport fans around the world. An overwhelming favourite at the 1988 Seoul Olympics, he came within one miss of finishing out of the medals completely. However he easily cleared the height - 5.90 metres - and won the long awaited Olympic gold medal with an Olympic record. In 1991, he became the first person to clear 20 feet, which to this day has not been achieved by anyone else. He eventually set world records 35 times, 18 times indoors and 17 times outdoors and earned the nickname of "the Tsar".

his meticulous approach to training and competition and the drive needed which made him both Olympic and World Champion and enabled him to achieve his World Record.

An inspiring and motivating speaker, Sergey is highly sought-after by audiences around the world keen to hear his story and to benefit from his passion and drive.

How to book Sergey Bubka?