Russell Watson is an English tenor who has released singles and albums of both operatic-style and pop songs. The self-styled "People's Tenor" had been singing since he was a child. He has sold millions of records worldwide and has performed for some of the most influential people of our time. 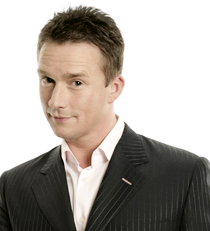 Russell came to attention in 1999 when he sang the UK's national anthem at the Rugby League Challenge Cup Final at Wembley Stadium, "Barcelona" at the last match of the Premiership season between Manchester United and Tottenham Hotspur at Old Trafford and a full set of songs at the final of the UEFA Champions League in Barcelona between Manchester United and Bayern Munich. The sports theme has stayed with Russell and in 2002 he was invited to perform at the opening ceremony of the Commonwealth Games in front of a worldwide television audience of 1 billion people. Russell has performed for the King of Malaysia, The President of the United States, the Emperor of Japan, Former Prime Minister Tony Blair, Prime Minister of Germany, various powerful Sultans, The Beckham's and even the late Pope John Paul II who requested a private audience with Russell at the Vatican in Rome.

The story of Russell Watson is inspirational. It depicts the meteoric rise of a humble factory worker from Salford who was catapulted into international singing stardom. Russell has been no stranger to career and life threatening scenarios, having suffered two separate brain tumours. After staging a concert at Windsor Castle in the presence of Prince Charles and Camilla Duchess of Cornwall, Prince Charles requested Russell's services as an ambassador for his coveted charity The Princes Trust.

Russell is at his best in front of a live audience, gaining new fans wherever he performs.

How to book Russell Watson?