Former Prime Minister of Italy, President of the European Commission (1999 - 2004)

President Romano Prodi is a former Prime Minister of Italy and subsequently held the post of the 10th President of the European Commission. Following the ending of his term, he returned to Italian politics. He was also the Chairman of the Council of Ministers of Italy and Special Envoy for Africa's Sahel.

"I am committed to closing the gap between rhetoric and reality in Europe? 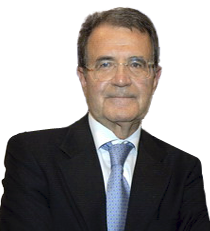 Romano Prodi graduated in economics at Milan's Catholic University and did postgraduate studies at the London School of Economics. He also spent a year as visiting professor at Harvard in 1974. He has received almost 20 honorary degrees from institutions in Italy, and from the rest of Europe, North America, Asia, and Africa. From 1982-1989 and 1993-1994 Prodi was CEO of the powerful state-owned industrial holding company IRI. He surprised everyone by successfully getting Italy accepted as a member of the single European currency against all odds.

His long experience as a politician and economist has enabled him to become one of the most recognised experts in Europe to treat some of the more topical issues such as the economic crisis or the use of renewable energy.

A seasoned, thoughtful and articulate world leader, Romano Prodi has an understated style, backed up by delivery and action.

He presents in Italian & English.

How to book President Romano Prodi?