Rob Andrew MBE was named as the Rugby Football Union's new director of rugby operations in March 2011 having served as the Rugby Football Union's elite director of rugby since 2006. England's most-capped Fly Half now shapes the RFU going towards the World Cup in 2015. His new position includes responsibility for overseeing tournaments and competitions, referee and coach development as well as sports science and medicine, and player welfare. 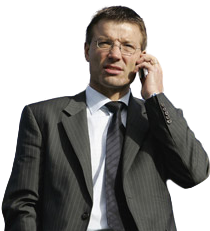 In his professional life, away from his sport, Rob is an Associate Director at DTZ Debenham Thorpe, heading a team of surveyors advising investors on the buying and selling of commercial property in London. Nicknamed "Squeaky", he is also the highest point scorer in English Rugby history and holds the World Record for the highest number of points scored in one game. He had lead Newcastle to their first Premiership title by 1998. At the end of 1999, he was appointed by the RFU to head up a task force for the restructuring of the game in England. He delivered a blueprint with the same unerring force & accuracy he once displayed on the field of play.

In his presentations he offers audiences an in depth look at the skills that are required of him as part of the team competing to make England one of the best Rugby Union nations in the world.

Rob's powerful delivery is an effective tool for inspiring teamwork and motivating audiences from all fields. His presentations are universally applicable & his anecdotes unrelentingly trenchant, regardless of the level of his audience's interest in Rugby Union.

How to book Rob Andrew MBE?