Riz Khan currently hosts his own television show on Al Jazeera English. In 1996 he launched his interactive interview show CNN: Q&A with Riz Khan and he has conducted interviews with guests including former UN Secretary General Kofi Annan, former US Presidents Jimmy Carter and Bill Clinton, the Dalai Lama and Nelson Mandela to name a few. He also secured the world exclusive with Pakistan's General Pervez Musharraf following his coup in 1999. He was a presenter and reporter at the BBC for eight years and was the first mainstream Asian newsreader for their international network. 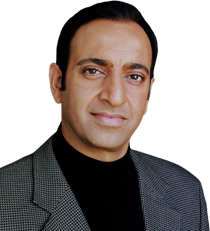 Riz Khan joined the Air Training Corps, graduated with a Bachelor of Science with Honours in Medical Physiology from the University of Wales, and then completed a postgraduate course in Radio Journalism at the University of Portsmouth. He first rose to prominence while working for the BBC and CNN and would later become one of the founding News Presenters on BBC World Service Television News. He hosted the news bulletin that launched BBC World Service Television News in 1991. In 1993, he moved to CNN International, where he became a senior anchor for the network's global news shows.

Riz Khan is a highly respected presenter and interviewer who offers a unique window into the lives and activities of the world's top political and business leaders resulting in a treasure trove of invaluable insights and information.

He presents in English, Hindi and Urdu.

How to book Riz Khan?