Winner of the 2006 Nobel Prize for Literature

Orhan Pamuk is a Nobel Prize-winning novelist and is the recipient of numerous national and international literary awards. He is currently a Fellow with Columbia University's Committee on Global Thought and holds an appointment in Columbia's Middle East and Asian Languages and Cultures.

"One of the world's most celebrated novelist" 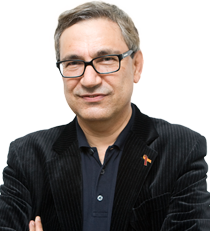 Orhan Pamuk studied architecture at the Istanbul Technical University before leaving to become a full-time writer. He graduated from the Institute of Journalism at the University of Istanbul in 1976. He was a visiting scholar at Columbia University from 1985 to 1988, a period which also included a visiting fellowship at the University of Iowa. He was awarded the Nobel Prize in Literature on October 2006, becoming the first Turkish person to receive a Nobel Prize. Orhan was ranked no 4 among 'the most influential voices of 2015' by The WorldPost and the Zurich-based Gottlieb Duttweiler Institute and in 2017 he has received a doctorate from the Accademia di Bella Arti di Brera (Italy).

Orhan Pamuk is not only one of the world's best known authors but also one of the most outspoken social and political commentators. In his presentations he tackles a wide range of social, political and economic issues as he explains to audiences the potential opportunities for organisations. He is supporter for Turkey's accession to the EU.

Orhan Pamuk mesmerises audiences with his highly engaging speeches and he is an ideal choice as a guest for events where a live interview format is used.

He presents in Turkish and English.

How to book Orhan Pamuk?