Matthew Hoggard MBE is one of the most successful international cricketers to have played for England. In 2013, he announced his retirement from all forms of cricket, bringing a hugely successful 17-year career to an end. Matthew is now a rising star in the media, featuring across the national press and on a range of popular TV programmes. He is increasingly sought-after for his expertise and humour on cricketing coverage across a variety of networks including the BBC, Sky Sports and BT Sport. 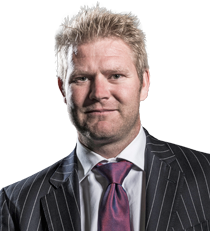 Matthew played for and captained, Leicestershire County Cricket Club where, after leaving his home county of Yorkshire at the end of the 2009 season. He took his 700th first-class wicket during the 2010 campaign and continues to be an asset on the field as an opening bowler, and off the field as a mentor to the teams' younger professionals. He was a vital member of the inspirational England side that won the epic 2005 Ashes series and has been a model of consistency throughout his test and ODI career, representing his country on 93 occasions.

One of the world's greatest bowlers, Matthew's ultimate determination to succeed at the highest level has afforded him many fans in the cricketing world. With a unique take on life, the Yorkshire born cricketer is the ideal choice for any event and is a huge draw for audiences of all ages. Playing a pivotal role in one of the most successful periods in English cricket, Matthew has a remarkable story to tell and is a great asset to the after dinner circuit.

Delivering his speeches with great enthusiasm, he is sure to make any event a resounding success, entertaining with tales from over a decade competing against some of the greatest cricketers in history.

How to book Matthew Hoggard MBE?