One of the World's Leading Advertising Creatives 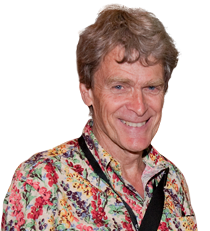 Born and bred in North London, John Hegarty was studying painting when his teacher suggested he go to what was then the London College of Printing (LCP, now LCC) to study graphic design. His early days were working with Charles Saatchi and he founded Bartle Bogle Hegarty (BBH) in 1982 with the ambition to be the best agency in the world. It has risen to global renown with offices in London, New York, Singapore, Shanghai, Mumbai, and São Paulo. The Garage, a venture, launched in 2014 enables Sir John and Tom Teichman to share their expertise in finance and branding with the next generation of existing and upcoming start-ups from tech and the creative industries. For his work in advertising he has received numerous awards.

With over four decades of wisdom and insight from the man behind hugely effective and influential campaigns for brands such as Levi Strauss, Audi, and Unilever, Sir John encourages creative energy, where the next big idea can front a million-pound campaign. He provides insights into how a great idea on one medium today will get picked up and amplified through digital and social media. He takes intelligence and turns it into magic and discusses, the notion of ideas - why he likes them, what he likes about them and how his are formed.

A truly creative genius and such an inspiring speaker, Sir John presents fascinating work, engaging and involving his audiences in a way that's brilliantly entertaining and memorable. He illustrates the unlimited power of an idea.

How to book Sir John Hegarty?