Massimiliano Rosolino is Italy's most successful swimmer ever. At the Sydney Olympics in 2000 he won three medals including gold in the 200m medley setting an Olympic Record in the process. He has also competed successfully in the world and European championships with a host of gold, silver and bronze medals to his name. He currently holds the Italian 200m medley and 800m freestyle records. 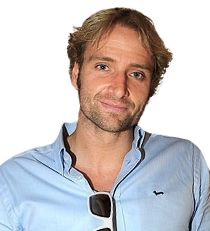 Massimiliano was born in Naples and moved to Australia when he was a child. He first participated at the Olympics in 1996 in Atlanta where he reached three finals (200m, 400m and 4x200m freestyle), finishing sixth in all of them. It wasn't until the World Championships in Perth in 1998 when he won a silver medal that he showed his true ability as one of world's great swimmers.

Drawing on his own personal experiences competing around the world at the highest level, Massimiliano shows audiences the drive and determination that have made him into a champion. He inspires and motivates audiences with his infectious winning spirit and spurs individuals on to succeed beyond their wildest dreams.

He presents in English or Italian.

How to book Massimiliano Rosolino?