Martin Bayfield was one of England's tallest and most potent rugby forwards. On the field he enjoyed a successful international career, winning 31 England caps and two Grand Slams as well as representing the British Lions. He is now a popular after-dinner speaker, television broadcaster and commentator.

"Surprisingly rugby and acting is very similar in some aspects" 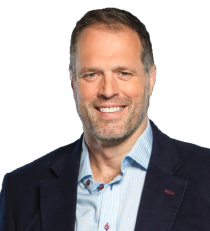 In addition Martin has appeared on BBC's Radio 5 Live as a Rugby Correspondent as well as covering the NFL,The World's Strongest Man and the Rugby World Cup. Martin has also broadened his horizons to include acting and he has played Hagrid's body double in the Harry Potter films. Martin also played Rugby Player 2 in an episode of New Tricks on BBC1. He is actively involved with charity and is an Honorary President of Wooden Spoon - the rugby charity that supports disadvantaged children and young people. Martin is an exceptionally funny after dinner speaker and an excellent motivator.

Martin Bayfield, the 6ft 10 lock - one of the tallest rugby players in the history of the game, is widely admired for his determination, motivation and true ability which he has dedicated to international rugby. He is an extremely entertaining former Rugby Football Player of the Year with an abundance of rugby-related anecdotes. He might also recount tales from his early days as a police protection officer, like the time he fell asleep while guarding Ian Paisley.

Martin is an immensely funny and quick witted speaker whose abilities also include MC-ing and motivational speaking. He is both entertaining and insightful and through his presentations he is able to show corporations the importance of strong leadership and teamwork.

How to book Martin Bayfield?