Mark Hunter retired from rowing after adding a Silver medal from London 2012 to his 2008 Olympics Gold medal. He decided to try something completely different so he started work as a Project Manager. Mark then moved to London Youth Rowing, a youth charity initiative. He is currently interim CEO, running the coaching program. 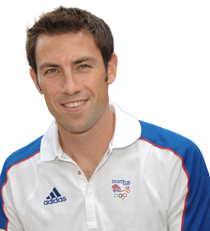 Mark started rowing aged 14, having played county football, swum and tried various martial arts before deciding to direct all his time and effort into rowing. If life had taken a different turn, Mark Hunter would now be plying his trade on the River Thames as a licensed waterman and lighterman - an ancient profession to which he was apprenticed for six years before gaining the Freeman of the Thames qualification to skipper passenger and freight boats on London's waterway. During his year off after the 2008 Olympics, he was an Assistant Coach of UCLA Women's rowing program.

As an Olympic Gold medallist, he brings with him a story of success but, more importantly, Mark Hunter is a consummate professional, shown by the necessary brutal diet he has to stick to in order to attain the five per cent body fat (akin to professional road cyclists). His presentations illustrate the devotion necessary to achieve the goal of Olympic Gold, which has proved to impress, inspire and motivate his wide-ranging audiences. Sacrifice, failure, hard work and determination all contribute to Mark's remarkable story.

The personification of sheer determination, Mark delivers fascinating presentations that energize and motivate his captivated audiences. He includes anecdotes about his experiences, the national anthem, the flag, culminating in his dream come true.

How to book Mark Hunter MBE?