Lewis Gordon Pugh is an ocean advocate, pioneer swimmer and explorer who has put his hard-learned lessons into the context of a corporate environment. He shares the visualisation that enabled him to undertake the first swim across the sub-zero waters of the North Pole.

"Lewis is one of the world's leading inspirational speakers" 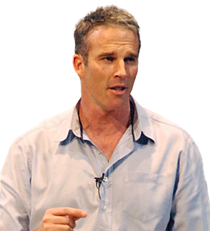 Lewis has received a number of awards including France and South Africa's highest honours, as well as the Freedom of the City of London. In 2010, the World Economic Forum named him a Young Global Leader for his "potential to contribute to shaping the future of the world through inspiring leadership" and in 2013 the United Nations Environment Programme appointed him "Patron of the Oceans." Lewis is the only person to have completed a long distance swim in every ocean of the world. To date he has pioneered more swims around famous landmarks than any other swimmer in history. Each of these seemingly impossible feats was done to raise awareness about the vulnerability of our oceans and their importance to humanity. And he's not finished yet.

Lewis is a vivid storyteller. His inspiring account of leading expeditions in Polar Regions, in the most ferocious conditions imaginable, never fails to captivate an audience. His talks make a difference, to individuals, and to organisations.

Lewis has learned how to harness the energy that comes from overcoming extraordinary odds. And he knows how to inspire audiences to rise to their own internal challenges.

How to book Lewis Gordon Pugh?