Lawrence Okoye is the sporting phenomenon making history by signing a professional contract with NFL franchise, the San Francisco 49ers, just months after representing Team GB in the discus at the London 2012 Olympics. Despite his youth Lawrence has a very mature attitude and understands the dedication needed to succeed in his sport.

"If at first you do succeed, try, try and try again" 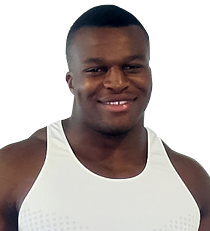 Lawrence's transition to NFL came almost by accident after attending a Regional NFL Combine while warm weather discus training in the States. So impressive were his stats that despite never having played a 'down', he was invited to the highly competitive Super Regional Combine in Texas, an opportunity to trial amongst the elite of USA sporting talent. Lawrence began training full-time in the discus in September 2010 and at the age of twenty-one was competing on the senior circuit. Before long, he was ranked fifth in the world. This culminated with Lawrence making the final of the London 2012 Olympic Games. Away from the field Lawrence has a deferred place, until 2017, at Oxford University to read Law.

Lawrence is a motivated young man who is very articulate and media friendly. He is a role model to the younger generation and would be an ideal brand ambassador. In this next chapter of Lawrence's already exciting sporting career he is attracting global media interest and his 6ft 6 inch and 23 stone frame makes him one of the most instantly recognisable athletes in British sport.

Lawrence, who boasts the British discus record and the longest throw ever by a teenager among his vast array of achievements, has a story more befitting a Hollywood movie hero than a modest young man from Croydon.

How to book Lawrence Okoye?