Jutta Kleinschmidt is the most successful woman rally driver ever, "the Dakar Queen". She created motor sport history with her triumphant victory in the 2001 Paris-Dakar Rally and, at the same time, blew away the myth that men are the best drivers. Since then, awards and honours have poured in for the charismatic German driver. She has become a motor sport icon and has changed the face of this male dominated sport.

In 2005 Jutta finished 5th in the Barcelona Dakar rally in the VW Tuareg she helped to design. 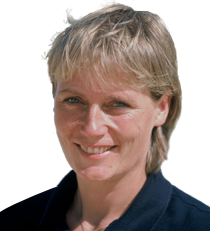 Jutta's first major sporting achievement came at the age of 18 when she was placed third in the world skibob championships. Jutta's first professional rally came in 1993, as co-driver in the car of her then partner, Jean-Louis Schlesser, in the UAE Desert Challenge. Jutta soon became a member of the rallying elite winning race after race firstly as a motorcyclist, then co-driver and finally as a driver in her own right. In 2002, she signed a contract with Volkswagen to try to win the Dakar Rally with a diesel-powered car. In 2006, she joined Sven Quandt's X-raid team.

Jutta has vast media experience having been commentator on several TV programmes, such as Fernsehgarten (Germany's ZDF) and Tipps and Trends (Germany's 3sat). She allows audiences to share in her technical know-how and sporting experience as a desert driver. She captivates and motivates listeners as she explains the importance of teamwork and how to achieve the seemingly impossible.

A highly enjoyable and experienced speaker, Jutta enthrals with her presentations and is in great demand by audiences eager to benefit from her unparalleled ability to motivate.

She presents in German and English.

How to book Jutta Kleinschmidt?