Dr. Jung Chang is the author of the best-selling books 'Wild Swans - Three Daughters of China' (the most read book about China) and 'Mao: The Unknown Story' (co-written with Jon Halliday). Both books have been translated into more than 30 languages, and together sold some 15 million copies.

A compelling writer and raconteur 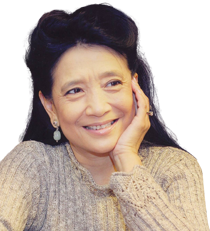 Born in Yibin, Sichuan Province, China in 1952, Jung Chang worked as a peasant, a 'barefoot' doctor, a steelworker and an electrician before becoming an English Language student and, later, an assistant lecturer at Sichuan University. She left China for Britain in 1978 and was awarded a scholarship by York University, where she obtained a PhD in Linguistics in 1982 - the first person from the People's Republic of China to receive a doctorate from a British University. She has also been awarded honorary doctorates from the Universities of Buckingham, York, Warwick and the Open University and Bowdoin College, USA.

Her spellbinding lectures charting the dramatic developments in 20th century China provide a truly unique but ultimately inspiring and uplifting experience and help to understand the challenges of 21st Century globalisation. The lessons to be learned from her highly acclaimed book 'Mao - the Unknown Story' add tremendously to the understanding of Chinese culture and development.

A gifted storyteller, her presentations stimulate emotions and leave audiences reflecting upon her powerful and moving messages, taking them on a thoughtful and, at times, emotional journey.

She presents in English and Chinese.

How to book Jung Chang?