José Manuel Barroso is one of Europe's leading political figures. From November 2004 to October 2014 he was the President of the European Commission. From 2002 to 2004 Barroso was Prime Minister of Portugal. He participated in several international missions and played a key role as mediator of some of the most recent peace accords. In addition, he was a member of various advisory groups to the Secretary-General of the United Nations. 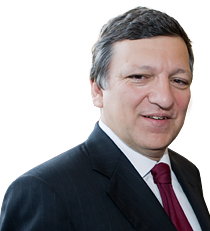 After graduating in law from the University of Lisbon, Manuel Barroso completed a Diploma in European Studies at the European University Institute Geneva and a Master's degree in Political Science from the University of Geneva, earning honours in both. His academic career includes a visiting professorship in Political Science at Georgetown University. Manuel Barroso has been awarded more than thirty Honorary Degrees and is the recipient of numerous international awards and distinctions. In 2006 he was named European of the Year by the European Voice and was named Global Leader for Tomorrow by the WEF in 1993.

Regarded as a leading politician, Manuel Barroso inspires political partnership between governments, institutions and commissions around the globe. His unique understanding, drawing upon his experiences as the President of the European Commission, he addresses vital issues particularly on Europe and International Relations.

His excellent leadership qualities and outstanding knowledge as one of Europe's foremost politicians make José Manuel Barroso a highly sought after commentator at the most prestigious conferences around the world.

He presents in English and Portuguese.