Johnny Robinson won the hearts of the nation after winning his way through to the live shows of the 2011 ITV X-Factor. He took his chance to shine at the London auditions and went all the way to the final eight of the competition. Mentored by Louis Walsh - Johnny struck up a close bond with fellow judge and Take That front man Gary Barlow who described Johnny as "One of the nicest people in the competition". Johnny excelled each weekend with memorable performances of Cher's Believe and a flamboyant version of Kylie's Can't Get You out of My Head before eventually being voted out.

"It is lovely to hear that I touched people" 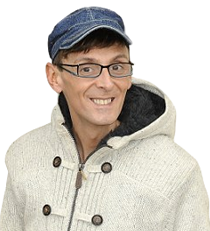 Since his X Factor exit, ITV have big plans for the 45 year old from West London, it's claimed that he could even be their anchorman for the American Golden Globes. Johnny first hit our TV screens when he took part in the popular TV show Stars in Their Eyes back in 1992 when he performed as Boy George. He went on to win his show and competed in the grand final. Since his new found fame on the most watched TV programme, Johnny is looking to the future and plans to make an album.

It's not only Johnny's unusual and unique voice which has ensured him a place on the circuit, his unbelievable personable character and down to earth like ability has made him a 'must have' guest at Awards shows, Personal Appearances and Corporate occasions.

Highly entertaining and professional it's no wonder Johnny's popularity continues to grow amongst the corporate sector.

How to book Johnny Robinson?