John Simpson, BBC's World Affairs Editor and head of the team of foreign and special correspondents, has reported from more than 100 countries, including 30 active war zones. Known as one of the world's most experienced and authoritative journalists, he has interviewed some of the world's most famous and controversial leaders.

"His remarkable life offers a ringside seat at every major event in recent global history" Amazon.com 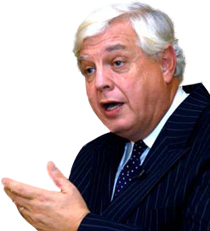 John has received numerous international awards and academic honours including, Royal Television Society's Journalist of the Year in 1991 and 2000, International Ischia Journalism Prize, Italy's most prestigious media award, including an honorary fellowship from Magdalene College in 1999. He was made Chancellor of Roehampton University in 2005 and most recently received an honorary Doctor of Laws degree from the University of Leeds.

John is an accomplished public speaker and enthrals audiences across the world with his lively and entertaining talks and lectures. He has the ability to cover topics from highly factual and intense world affairs to more light-hearted and amusing anecdotes from his extensive travels.

Always the consummate professional, John Simpson brings great depth to his fascinating and moving presentations making him one of the most sought-after speakers currently available.

How to book John Simpson CBE?