Jody Cundy MBE is one of only a handful of Olympians and Paralympians to win gold medals in two sports. He represented Great Britain at the 2008 Summer Paralympics in Beijing where he broke the world record on the way to winning the gold in the 1km Time Trial with a time of 1 minute 5.466 seconds. In 2011, Jody set up his own cycling team, the Para-T Paracycling Team, which is made up entirely of elite para cycling athletes to help promote disability sport.

"He is the fastest solo Paralympian of all time" 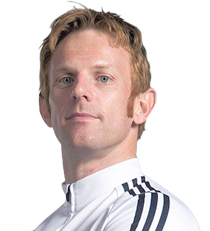 Jody's right foot was amputated when he was just three years old. With an artificial limb he was swimming at club level against able-bodied swimmers by the age of 10, and representing Great Britain at the World Swimming Championships by 16. He surprised everyone by winning in the Butterfly, the first of 23 international competition medals (including 14 golds) in a 10-year career in the pool. In 2006 Jody won his first individual gold medal at the World Track Championships in Switzerland. In 2009 he was made an MBE in the New Years Honours list for his services to disability sport.

Jody draws on his vast experiences as an international sportsman to provide a fascinating and inspirational platform for his motivational speeches. In telling his story, he takes the audience on a roller coaster ride of emotions, but also explains the secrets of his success.

Jody's ability to tell his story in a very grounded, simple and authentic way enables him to touch everyone in his audience.

How to book Jody Cundy MBE?