World Champion Heptathlete & One of the UK's Most Famous Sportswomen

Jessica Ennis-Hill returned from the European Championships in Barcelona 2010 a champion and one of the country's most famous sportswomen. She is the current World and European heptathlon champion and world indoor pentathlon champion. In 2010 she was chosen to receive a D.Litt Honorary degree from the University of Sheffield for her excellent contribution to sport. She came third in the 2009 BBC Sports Personality of the Year. 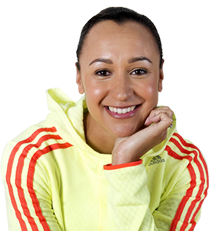 Jessica Ennis-Hill graduated in Psychology from the University of Sheffield. 2006 was her first season as a senior athlete and true to form she achieved her first senior medal ... in her first major championships! A bronze medal at the Commonwealth Games in Melbourne marked the arrival of a new star on the British team. She won the gold medal in Berlin 2009, the World Indoor Pentathlon and European Championships in 2010. In 2007 she equalled the 25 year old British High Jump record for women by jumping 1.95m. She won European Athlete of the Month three times in 2010.

Jessica Ennis-Hill is a phenomenally popular media personality. Having overcome her career threatening triple stress fracture of the right foot which ruled her out of the 2008 Beijing Olympics, she communicates with her audiences the preparations necessary to conquer any obstacles to success.

With an abhorrence of presumptuousness, Jessica Ennis-Hill's eloquence and good looks, combined with that life-changing gold medal, mean she is in great demand at prestigious events.

How to book Jessica Ennis-Hill?