Fast becoming recognised as one of the best chefs around, Heston Blumenthal is the chef-proprietor of the Fat Duck restaurant in Berkshire. The Fat Duck was voted "Best Restaurant in the World" in 2005. He was awarded his first Michelin star in 2000 and has since received a further two. 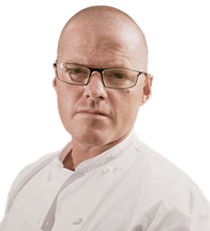 Heston's passion for food was kindled at the age of 10 by a family visit to Provence. As a teenager he started to experiment in the kitchen, before taking a day job as a debt-collector with his parents' finance company. Amassing a hoard of books, he gradually worked his way through the fundamental techniques, from sauce-making to charcuterie. In 2002 he was awarded the Good Food Guide's Chef of the Year, the AA Guide's Restaurant of the Year awards and in 2006 an honorary degree from Reading University in recognition of his unique scientific approach to food and outstanding achievements in biosciences.

Heston is that rarest of creatures in Britain - a totally self-taught chef. But when he entered the profession he wasn't wholly without training, after all, given the pressures of the modern restaurant business, what could be more useful than a background in kick boxing and debt-collecting? The Fat Duck, his three-Michelin-starred restaurant in the village of Bray in Berkshire was also voted Best Restaurant in the UK by the Good Food Guide 2008. His Television Programme Heston Blumenthal- In Search of Perfection showing his unique approach to British classic dishes gained a GQ Glenfiddich award in 2007.

An immensely entertaining and inspiring speaker, Heston is highly sought after by clients eager to hear first hand the secrets of his tremendous success.

How to book Heston Blumenthal OBE?