Graeme Le Saux is a former England international footballer who played most of his career as a left-back, though his football pace and skill enabled him to move into a left sided midfield role when required. Since retiring from football, he has enjoyed punditry and commentary roles on TV and Radio. He has also moved into non sport formats presenting on programmes such as BBC2's Working Lunch where he has the chance to further develop his knowledge and interest in financial and business affairs. More recently Graeme's compassionate nature took centre stage when he took part in the ITV series Extinct, travelling to Rwanda to highlight the plight of mountain gorillas. 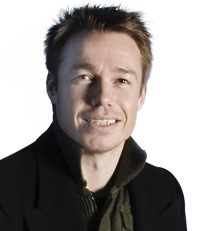 Graeme began his football career at Chelsea after being spotted at youth level in Jersey. During his playing career he has won honours at club level for Southampton, Chelsea and Blackburn, where he won the Premiership title in 1994/1995. He also spends time supporting charities including Sightsavers, Oxfam and the NSPCC. In 2006, he joined ABN AMRO Bank's UK private banking team in the role of Ambassador for their Sports Desk. He has also written numerous articles for The Telegraph newspaper amongst others.

Graeme's thoughtful manner and views on the modern game, combined with international status, makes him extremely popular with all forms of football media. He is extremely intelligent and one of the most gifted and articulate footballers of his generation.

Graeme has a natural calm, cheerful and contagious energy that he communicates to his audiences, inspiring them on the path towards achieving their dreams. His winning style and manner is both infectious and uplifting.

How to book Graeme Le Saux?