Geri Halliwell is a former member of the famous Spice Girls, a global music phenomenon selling over 55 million albums worldwide. She is a great entrepreneur and an incredible role model to women of all ages and has most recently designed a swim wear collection for Next. She has overcome an astronomical amount of obstacles and is a huge success story. She has been a UN Goodwill Ambassador for the past 10 years, taking a special interest in issues affecting women and children. 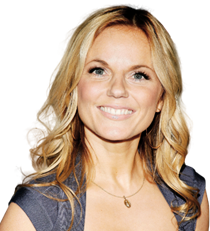 After coming to international prominence in the late 1990s as Ginger Spice, she launched her solo career in 1998 and released four albums. She has been nominated for two British Awards in 2000 and 2002. She has also published two bestselling autobiographies, written a series of bestselling children's books and produced 2 hugely successful yoga dvd's.

Geri is a hugely inspiring speaker; her "rags to riches" story is one that resonates with audiences around the world. She entertains and expresses her views energetically.

Geri has an aptitude for storytelling and performing. She adds glamour and charisma to any event.

How to book Geri Halliwell?