Gary Neville is best known for Manchester United. During his time with United he became a key part of the team on and off the pitch in one of the most successful periods for one of the most successful clubs in English football. Seen as a dedicated, determined professional, he has applied his outlook to his roles on television and in businesshis two-decade long career at Manchester United.

"One of the most decorated English players of all time" 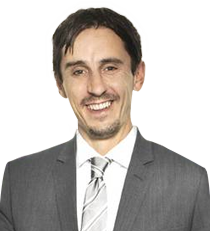 After his playing career, Gary took up coaching as well as media roles. He had spells as the Assistant Manager of the England team and as Head Coach at Spanish club Valencia. In the media, he became a popular, often outspoken analyst on Sky Sports. With a long-term interest in business, and in particular property, Gary also invested in a digital agency and a property development company, both based in Manchester. Alongside former teammates Giggs, Scholes, Butt and brother Phil, Gary is also co-owner of Salford City Football Club. The group's purchase of the club, and the revolution they attempted to introduce on and off the pitch, was documented in the BBC series Class of 92

With a wealth of insights from his playing days, Gary offers a look into the psyche of a professional sportsperson, at the motivation required to achieve at the highest level, at leadership and at what it means to be a part of a successful team. He also looks at the risks and rewards of stepping outside of your comfort zone, and at the lessons he transferred from sport to business and those he has had to learn on his own.

He is a relaxed, thoughtful and engaging speaker. He captivates his audiences with his energy and enthusiasm.

How to book Gary Neville?