President & CEO of the Leader to Leader Institute

Frances Hesselbein is the President and CEO of the Leader to Leader Institute (formerly the Peter F. Drucker Foundation for Nonprofit Management) & its Founding President and former CEO of the Girl Scouts of the USA. Mrs. Hesselbein was awarded the Presidential Medal of Freedom, the United States of America's highest civilian honour, in 1998. In 2002 Mrs. Hesselbein was the first recipient of the Dwight D. Eisenhower National Security Series Award for her service with the U.S. Army. She is the co-editor of 24 books in 28 languages.

Fortune cited her as the "Best Non-profit Manager in America." 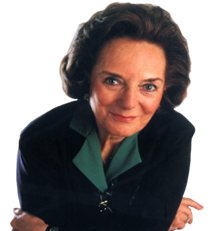 She serves on many non-profits and private sector corporate boards, including the Veteran's Corporation Advisory Board, the Board of the Mutual of America Life Insurance Company, New York, and the Boards of the Centre for Social Initiative at the Harvard Business School and the Hauser Centre for Non-profit Management at the Kennedy School. The Presidential Medal of Freedom was awarded for her role as the founding President of the Drucker Foundation, and her service as "a pioneer for women, diversity, and inclusion".

Mrs. Hesselbein has a wealth of experience presenting at leadership and management seminars around the globe. She offers clients the benefit of her unprecedented expertise and foresight in the area of organisational change and development. She shares her unique vision of what the organisation of the future should look like and what organisational leaders must do to survive in the tumultuous twenty-first century.

An emotive speaker, Frances challenges mindsets with her innovative ideas presented in an easily digested format.

How to book Frances Hesselbein?