Florian Langenscheidt is widely respected for his innovative approach to publishing, the future of new media, and consequently the future of e-business. He was the Managing Director of the traditional Langenscheidt publishing Group, which publishes the Brockhaus and the Duden. He is also dedicated to social projects and is partner of the German Children and Youth Foundation. Florian regularly writes articles for renowned newspapers like FAZ, Die Zeit, SZ and Tagesspiegel.

"One of the Germany's most important media experts" 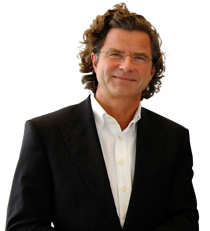 Born in Berlin to the Langenscheidt dynasty, whose name has become synonymous with the famous dictionary group, Florian took on the running of the 150 year-old family business in 1990, the Langenscheidt Publishing Group. Between 1985 and 1994 he held various managing positions within the Group and from 2002 to 2009 he was a member of the Board of Directors. He studied German Literature, Journalism and Philosophy in Munich and is a graduate of Harvard University and a MBA holder from INSEAD.

Dr. Langenscheidt is widely regarded as one of the leading authorities in Germany on Innovation & the Future of Media. His numerous speeches at home and abroad are centered around optimism, values, family companies, trademarks, school, education, luck and Germany.

Florian Langenscheidt engages his audience with a unique "return to innocence" theme whilst discussing the trendiest topics of innovation and future media. Though far advanced into the world of the e-book, Florian Langenscheidt still believes in the emotional experience of reading a book. "You hold it, you smell it, you feel it!". He delights audiences with his humorous and entertaining style.

He presents in German, English or French.

How to book Dr. Florian Langenscheidt?