Finn Kydland is the Henley Professor of Economics at the University of California, Santa Barbara. He was awarded the 2004 Nobel Prize in Economics. The prize, which he shares with Edward C. Prescott, is "for their contribution to dynamic macroeconomics: the time consistency of economic policy and the driving forces behind business cycles". His methods have been widely adopted in modern macroeconomics. 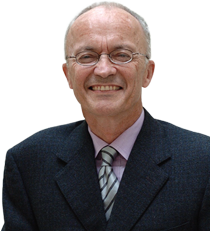 Finn Kydland joined the UC Santa Barbara faculty in 2004. He previously earned a B.S. from the Norwegian School of Economics and Business Administration (NHH) and has taught and holds the Richard P. Simmons Distinguished Professorship at the Tepper School of Business of Carnegie Mellon University, where he earned his Ph.D. He has held visiting scholar and professor positions at, among other places, the Hoover Institution and the Universidad Torcuato di Tella in Buenos Aires, Argentina.

Dr. Kydland is a recognised driving force behind business cycle fluctuations and the design of economic policy and macroeconomic research. His ground-breaking work is highly visible in his areas of expertise - economics in general and political economics. He provides global audiences with rich insights into business cycles, monetary and fiscal policy and the current global economic outlook.

Finn Kydland is an experienced conference speaker whose high content presentations have helped transform the theory of business cycles by integrating it with the theory of economic growth.

How to book Dr. Finn Kydland?