12th President of the Philippines

Fidel Valdez Ramos was the 12th President of the Philippines. He succeeded Corazon Aquino and governed until 1998, when he was succeeded by Joseph Estrada. The first half of Ramos' six-year term as President was characterized by rapid economic growth and political stability in the country despite facing communist insurgencies, an Islamic separatist movement in Mindanao, and the onslaught of the 1997 Asian financial crisis.

"One of the Greatest Presidents of all time" 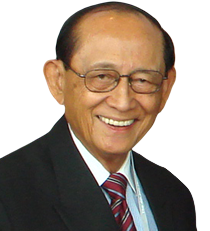 He is currently the Chairman of Ramos Peace and Development (RPDEV) Foundation, a non-profit organization dedicated to the promotion of peace and development in the Philippines and in the larger Asia-Pacific region, supporting national interests and people empowerment. He remains an outspoken critic of the governments that succeeded his and continues to be an influential force in Philippine political life.

President Ramos offers a unique and interesting perspective on what's coming ahead in the Asia Pacific region. He speaks in great detail about topics such as regional economic integration, political challenges and US Asia relations. He also offers audiences remarkable insights into the principles of people empowerment and effective leadership techniques.

An enthralling speaker, President Ramos demonstrates in his beautifully prepared speeches just exactly why he is regarded worldwide as a visionary and a political force to be reckoned with.

How to book Fidel Ramos?