Christopher Nolan is known for writing and directing such critically acclaimed films as Memento (nominated for both a Golden Globe and an Academy Award (Oscar) for best screenplay), the remake Insomnia, the film adaption The Prestige, Inception, and rebooting the Batman film franchise. He was nominated for the Directors Guild of America Award for Best Director for The Dark Knight.

"The best actors instinctively feel out what the other actors need, & they just accommodate it" Christopher Nolan 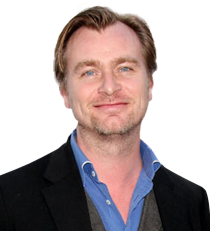 Christopher Nolan began making war movies using his father's super 8mm camera and an assortment of male action figures. He was educated at Haileybury and Imperial Service College, England and later studied English literature at University College, London. He directed his first feature film, Following, in 1998. His short film, Tarantella, was shown on Image Union, an independent film and video showcase featured on PBS, in 1989. Another short film of his, Larceny, was shown during Cambridge Film Festival in 1996.

One of Hollywood's most innovative filmmakers, Christopher Nolan offers captivating insights into today's innovative and creative movie making. His work is often based around an emotional or conceptual theme and he provides his audiences with fascinating details of his use of non-linear storytelling at the very height of his craft. For anyone interested in the creative process behind this film, he is ideally positioned to reveal his cinematic visions.

Having always dreamed as a child to direct a big blockbuster film, Christopher Nolan's passion for relating a story and natural charisma add to a wide range of worldwide events.

How to book Christopher Nolan?