Since 2006, Fabio Mastrangelo has acted as the Musical Advisor of Bari's "Fondazione Lirico Sinfonica Petruzzelli". From his debut with them in 2001, he has regularly led the Symphony Orchestra of the St Petersburg Philharmonic where he has also earned wide recognition by stepping in for Yuri Temirkanov as last-minute substitute on several occasions both in St Petersburg and on tour in Moscow, as well as for a concert in honour of Russian President Vladimir Putin. He gives regular concerts with the Russian cellist Sergei Slovachevsky, with whom he has toured extensively and released two CDs. In 2007 he was appointed Principal Guest Conductor of the Novosibirsk Academic Symphony Orchestra, one of Russia's most prestigious musical institutions.

"Anyone can be a potential classical music concert-goer. You only need a pair of ears and a heart..." 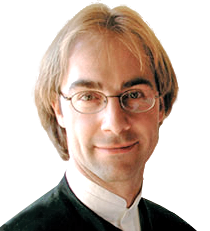 Born in Bari in 1965, he began piano studies there under his father at age 5. He later graduated from the Conservatorio Piccinni of Bari under Pierluigi Camicia, the Conservatory of Geneva under Maria Tipo, and the Royal Academy of Music in London. He attended masterclasses with Aldo Ciccolini, Seymour Lipkin, and Paul Badura-Skoda and won 1st prize in the piano competitions of Osimo (1980) and Rome (1986). Between 2001 and 2006, he was Artistic Director of the festival Etoiles du Chateau de Chailly (Chailly-sur-Armançon, France) where he performed chamber music.

Drawing on his professional experiences as a leading symphony conductor and prestigious classical musician, Fabio Mastrangelo delves deeply into the organisational aspects of music and translates this into practical lessons in leadership and teamwork.

He presents in English, Russian and Italian.

How to book Fabio Mastrangelo?