Edouard Balladur serves as an advisor to the French Government, presiding over the Constitutional Reform Committee. Recognised for his strong economic stance, the "franc fort" and his positive approach to European Monetary Union, Edouard Balladur was Prime Minister of France until 1995. He has made contributions to transatlantic relations as both a practitioner and a scholar. During the last 10 years Edouard Balladur has received numerous awards and distinctions, including: Prix Jacques Rueff d'économie, Prix Andese, Médaille d'or du mécénat de l'Académie francaise and the Prix Louise Michel, Prix Euromoney for Minister of Finance of the year (1987).

"The mentor of Nicolas Sarkozy" 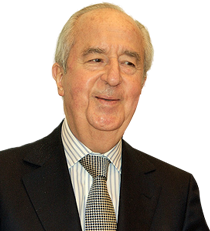 In 1962 he joined the Office of Radio and Television Broadcasting (ORTF). He started his career in 1964 as advisor of Prime Minister Georges Pompidou. He was Prime Minister of France in the early 1990s, bringing about extensive market reforms as Minister of the Economy in the 1980s. He has been a leader within the Gaullist movement for many decades. He is credited with having drawn the mainstream of French Gaullists back into a pro-European Union stance and into abandoning anti-American attitudes.

A remarkable man, Edouard Balladur puts an ambitious perspective before Europe and America: to combine their forces in a Union of the West, building on their existing arrangements for unity, adding new ones, and putting aside their prejudices against each other. He offers a series of practical steps to build a Union of the West. His proposals take on added importance now that his protégé, Nicolas Sarkozy, has come to hold the presidency of France.

A true visionary, Edouard Balladur demostrates strong qualities in his highly respected presentations. He has great flexibility, rapidity and a feeling for how to communicate.

How to book Edouard Balladur?