Edmund Phelps is McVickar Professor of Political Economy at Columbia University and director of Columbia's Center on Capitalism and Society. His work can be seen as a program to put "people as we know them" back into economic models - to take into account the incompleteness of their information and their knowledge and to study the effects of their expectations and beliefs on the workings of markets. 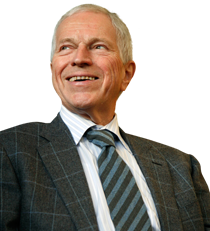 Edmund Phelps joined the Department of Economics at Columbia in 1971 after several years at Pennsylvania and earlier Yale. He was elected to the National Academy of Sciences (USA) in 1981 and was made a Distinguished Fellow of the American Economic Association in 2000. An international Festschrift in his honour was held at Columbia University in October 2001 and the 600 page conference volume was published by Princeton University Press in 2003. He also holds honorary doctorates from the Institut d'Etudes des Sciences Politiques de Paris (2006) and Universidad de Buenos Aires (2007).

Edmund Phelps demonstrates how low inflation today leads to expectations of low inflation in the future, thereby influencing future policy decision making by corporate and government leaders. He emphasises on the issue of savings and capital formation, but also the balance between inflation and unemployment.

Thanks to his deep understanding of market coherences and outstanding achievements in his field he inspires any audience with his excellent rhetoric skills and eloquent style.

Give us a call or send us an e-mail to find out exactly what Edmund Phelps could bring to your event.

How to book Prof. Edmund Phelps?