David Hempleman-Adams is the first person in history to reach the Geographic and Magnetic North and South Poles as well as climb the highest peaks in all seven continents; the Adventurers' Grand Slam. To date he has done 31 major expeditions around the world.

"David's accomplishments are great and many" 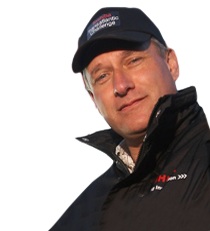 On leaving school David Hempleman-Adams LVO, OBE, DL took business studies at college in Manchester. While undertaking his postgraduate studies at Bristol Polytechnic, David was off again, climbing to the summit of Mount McKinley, Alaska, the highest point in North America. He became the first person to cross the Atlantic Ocean in an open wicker basket rozier balloon in 2003. In 2007, he crossed the Atlantic in the smallest helium balloon to break the record for that particular class of balloon flying this distance. In 2008, he, along with his co-pilot, won the 52nd Gordon Bennett Cup, becoming the first British team to win the coveted prize in 102 years. He also staged the world's highest formal dinner party, suspended from a balloon at 24,262ft. He received the Gold Star Award in 1984, the RADAR Person of the Year in 1992 and was awarded an M.B.E. in 1994 in the Queens Honours List for Services to Polar Exploration. In 1996 he was voted 'Pertex Outdoor Person of the Year' and in 1998 in the Queens Honours List he was awarded an O.B.E.

With his personal experience in the workplace and the synergy of team building and working towards goals either in the marketplace or the mountains, David Hempleman-Adams can tailor his talks and slide show to each individual presentation. Having reached the various Poles a record 14 times, his audiences are truly inspired by his words backed up by his accomplishments and unforgettable experiences. His exploits and adventures mean he is regularly in the news and constantly breaking records many consider impossible.

David Hempleman-Adams is a powerful, captivating and eloquent speaker who, together with stunning imagery, provides powerful messages for both everyone's business and personal lives.

How to book David Hempleman-Adams OBE?