Ciaran Gribbin is a Grammy nominated songwriter who has worked with world class artists such as Snow Patrol, Madonna, Paul Oakenfold and Paul McCartney and is currently the lead singer of INXS. He has also written and produced several soundtracks for movies.

"Frontman of one of the world's most renowned bands" 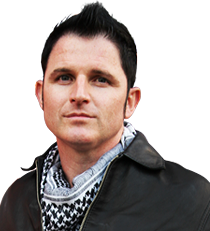 Ciaran grew up in Northern Ireland during difficult times, writing songs and performing in pubs in Belfast. His first big break came in 2010 when he received a Grammy nomination for Madonna's worldwide hit single Celebration, which he co-wrote with the American megastar and English producer Paul Oakenfold. Ciaran has worked extensively as a songwriter for acts such as Groove Armada and Dead Mau5. He has also worked on multiple movie soundtracks, including writing all the songs for the U2-supported feature film Killing Bono. In 2011, Ciaran became the singer of the legendary Australian band INXS. 2015 ended with an Oscar shortlist nomination for his song Hey Baby Doll, which was sung by Al Pacino in the critically-acclaimed movie Danny Collins.

A highly entertaining professional, Ciaran is a passionate personality whose creativity will inspire people with his tale of triumphing over adversity. Ciaran will also include his guitar during his presentations using it as a tool to enhance his speech.

As the frontman of one of the world's most successful bands, Ciaran has an unforgettable stage presence and charisma which makes him hugely popular at events around the world.

How to book Ciaran Gribbin?